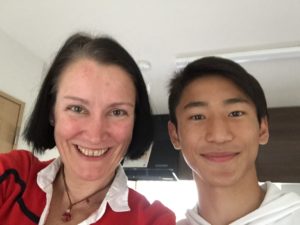 We have received the feedback and comments from the host family!

The Feedback from the Host Family

The guest was WONDERFUL! Hope he will come back, I think we really “clicked”. He is 14 and fabulous, the most positive guy ever. He loves English, mostly due to his 24 year Japanese teacher who he hero-worships, and also due to travels to Indonesia and the UK with his Mum, who lives in Nagoya.

I sincerely hope I can meet him again. We had such a good time and next time we hope to run on the beach (he will leave me in the dust), he will play magic for me and I will get him some fruit for him to make a smoothie.

Why The Guest Applied for this Homestay Program?

He is interested in going abroad but he can not afford it since he is raised by a single parent.
By joining this homestay program, he would like to learn how to write and speak effectively because he has been thinking about applying for an English Speech Contest. Another reason is that he would like to learn how to use his vocabulary correctly and communicate with foreign people. He believes that understanding, speaking, and listening in English is more important than the skill of programming, but it is difficult to learn these skills if he stays at his house.

Join us as a host family to support Japanese students!